New York’s all-female old-school death metal outfit Castrator is about to release their first full-length album “Defiled in Oblivion” on July 29th. A conversation with drummer Carolina Perez about women on stage, the importance of a guitar player who knows how to shred, and on how the band deals with hate messages. 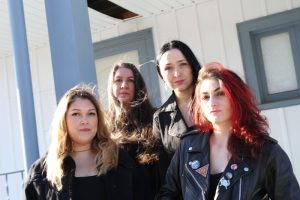 woxx: We are having this conversation the day after the US Supreme Court decided to end the constitutional right to abortion in the United States. mehr lesen / lire plus