He’s a successful Luxembourgish writer who chose already decades ago to live his dream abroad and write in English. Meet Pierre Joris, artist-in-residence this season at the Théâtre national du Luxembourg. 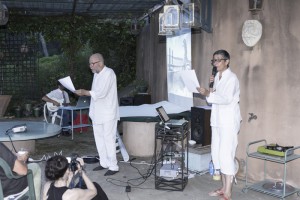 When starting a conversation with Pierre Joris, any poetry enthusiast has to be humbled by the achievements of the Strasbourg-born Luxembourger now residing in New York: close to 50 books published, ranging from poetry and essays to translations and anthologies. Among these are three volumes of the critically acclaimed “Poems for the Millennium” series (co-authored with Jerome Rothenberg and Habib Tengour), gathering poems from hundreds of twentieth-century avant-garde writers from all over the world. Yet Joris remains very approachable; poetry, after all, is also a humbling discipline that often requires great efforts to only offer a small albeit passionate public in return. This season’s residence is thus an opportunity to widen his public in Luxembourg.

While most of his countrymen choose to pursue a literary career in French or German, the poet decided himself for English. “At 18, I had started to write in German and in French, but the problematic of post-War German literature was not mine, and I was totally not interested in what the French were doing at the time,” Joris explained last year in an interview with American author Paul Auster. So English it was, a choice influenced as well by childhood memories of American movies and a copy of “On the Road” abandoned by a young couple on a Spanish beach. Probably the reason he remains less known in his native country than in the United States, despite six books published in the Grand-Duchy by Éditions Phi.

How would Joris describe his own poetry? “A poem needs to be a discovery. I get my first line from various sources of inspiration: other poems, newspaper articles, dreams, something I read on the back of a truck – but I do not wish to know where it takes me, otherwise I lose all interest.” This very personal view of creative writing is also the reason why he did not publish any novel: doing so would mean having a predefined plan, which Joris seems above all allergic to. And yet he confesses reading classic poetry with pleasure: “Of course I enjoy rereading Shakespeare’s sonnets. But I do not believe that a traditional sonnet is a meaningful format to describe today’s world.”

The poet’s innovative and modern style will be at the forefront of this year’s TNL season. Encouraged by friends Nico Helminger and Jean Portante, who also were artists-in-residence, Joris took up the challenge and will offer two very different pieces to the Luxembourgish public. The first one, “The Gulf (between You and Me)”, already premiered in the United States while he is still currently writing the second one, “The Agony of I.B.”. The former is a musical triptych on his poetry, commissioned by the Philadelphia-based choir The Crossing, directed by Donald Nally, on the Deep Water Horizon disaster in the Gulf of Mexico. The latter is a theater play, a genre he had not yet ventured into. “Although my work was never theatrical, it has always been tied to public performance. Public readings are an essential component of American poetry – so in a way my poems are similar to music scores that need to be interpreted on stage to be complete.”

Speaking of scores, each part of “The Gulf” was given to a different composer (Gene Coleman, Chris Jonas and Gabriel Jackson), resulting in three very different atmospheres. They were presented on three different evenings during summer 2013, following a first event where Joris read his own text. In Luxembourg, the triptych will be performed for the first time in one single evening, which the author is understandably quite excited about. “On top of my research, I also did a lot of fieldwork to write that piece. My wife and I drove to Florida and witnessed the scale of the disaster. Among others, I interviewed the fisherwoman and activist Kindra Arnesen, whose words are included in the third part.”

It is not difficult to feel that, despite being a commissioned work, “The Gulf” offers the poet the opportunity to take a political stand: “Moloch, Moloch / Moloch – / rules, Moloch / rules / all rules are broken when Moloch rules”, he writes in the final verses of the first part, in a discreet homage to Allen Ginsberg’s “Howl”. And when Joris adds later “the Vietnamese & the Cambodian communities / a really tough time being hired on / the great language barrier: / 90% of the information put out / in the first 60 days was English only,” he sneaks in a parallel between the predominance of the English language and the almighty power of the conglomerate between the US government and BP that minimized social and environmental unrest. This combination of lyricism and political criticism is to be found throughout Joris’s poetry.

“The Agony of I.B.”, to be staged next June in a world premiere, is by contrast an entirely personal project narrating the last days of Austrian poetess Ingeborg Bachmann. Besides Max Frisch and Hans Werner Henze, the other major character is Paul Celan, the famous German language Romanian poet. “Bachmann and Celan have been important to me from the very beginning of my career: after all, I have been translating Celan for about 50 years! The two met in 1948, two years after I was born, and Bachmann died in 1973, after I left Europe. So I was interested in looking back on this continent I was educated in after the War,” he comments. The play starts with the accident that led the Austrian author to fall into a coma, and then shows her being visited by the voices of the most important men in her life. Here, the evil English language that left some communities uninformed in “The Gulf” turns into a decisive advantage: it introduces a distance factor that the playwright can use to convey his own vision, rather than having to quote his characters in their original language and somehow dilute his personal touch.

How does writing for the theater modify Joris’s routine? True to his appreciation of everything disruptive, he explains: “I have to travel between New York and Luxembourg with 23 kilograms of books, the complete works of all writers mentioned in my play. Every day I dive into Bachmann’s words. Yet I am not sure I will succeed; writing this is taking a big risk, but that is what makes it worthwhile.” Master of parallels, Joris also mentions that Bachmann, not as recognized as she should be, had a literary career that started with poetry and evolved onto prose. “The next books I have in the making will also be in prose, although not using a specific genre – and certainly not novels.” While waiting for the results of this new endeavor, theatergoers will have this season the opportunity to discover or rediscover a unique Luxembourgish author. For those who enjoy the experience, there will be plenty to read after the performances.